Orgon and his mother have fallen under the influence of Tartuffe, a pious fraud. Tartuffe pretends to speak with divine authority. The rest of the family and their friends detest him. Tartuffe even tries to seduce Elmire, Orgon’s wife. Tartuffe nearly takes possession of Orgon’s house and betray him to the King. It turns out that Tartuffe has a long criminal history and has often changed his name to avoid being caught. The drama ends well, and Orgon announces the upcoming wedding of Valère to Mariane, his daughter.

The play is a comedy and much fun is made of Orgon and his being taken in by Tartuffe. MH enjoyed the play, although he found it a bit hard ‘to suspend his disbelief’, concerning the profound influence, which Tartuffe was able to exert on the Orgon family, nearly taking possession of the family home and betraying Orgon to the King. However, one needs to take into account the importance and influence of religion, at the time, as well as the social mores.

MH saw the play recently in English and started to reflect on the ‘imposters’ of our days, trying to carry forward the spirit and message of the play. Although there are lots of candidates, he opted for the Advertiser. The latter can be characterised as a ‘fraud’, pretending to speak with ‘authority’. For example,
the tobacco Advertiser vaunted the benefits of smoking long after it was known that ‘smoking kills’.

MH will develop this theme of the Imposter and welcomes others to join him with their favourite
modern-day imposters. 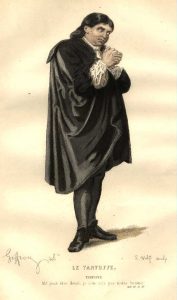 In the last few years we have seen a scary rise in the marriage of celebrity and diet/ detox endorsement. There’s little to no information about the side effects or main ingredients, the harm they may cause or any of the science behind how these products are supposed to work. They are instead, flogged in glossy paid adverts by celebrities with no expertise or authority in nutrition, medicine, or biology.

Quick-fix weight loss is never the answer and the risks far outweigh the benefits. If it sounds too good to be true, then it probably is. Celebrities who promote and endorse weight loss aids for payment, do so because brands have realised how influential their posts are with young people. As reported by the BBC, top doctors are now asking that celebrity ads for diet aids be banned by social media companies.

Powder over the internet can’t make you look like a celebrity who has a personal trainer, a chef, a surgeon and who uses photoshop. This is false and irresponsible advertising and it is part of a pervasive and disturbing rhetoric that preys upon eating disordered behaviour and the new trend of “quick fix” that relies upon a naive and vulnerable customer who is not educated as to the full list of health implications these products and diet restrictions can bring. I’m calling on Instagram, Twitter, Facebook and Snapchat to stop these being posted by celebrities.
We put the health risks on cigarettes and all drugs, and yet nobody is forced to do the same with these products, in spite of thousands of medical professionals speaking out about the harm and pseudo-science of it all. Please help me take the first step in dismantling this nonsense new culture by stopping those with the most influence from being able to freely spread lies and irresponsible, ignorant nonsense, to their vulnerable young followers.
With eating disorder numbers at an all time high, and as a former teenage anorexic who was very much so influenced by celebrities, I understand the importance of having good people around you. Thats why in 2018 I created The I Weigh Community which values people on their their achievements and attributes rather than what they weigh or how they look. It aims to make connections and be an ally to other activists and communities.
Join our revolution against shame – Please sign and share the petition with the hashtag #nomoredetoxscams on social media!

2.False Reviews of Products for Sale
Paraphrased from WHICH.

Sellers are manipulating the product advertisements and publicity to mislead internet customers with false reviews of products, which are for sale. In recent research, thousands of listings were investigated with the help of an Amazon expert to uncover how the system is being abused.We found reports of sellers offering buyers bribes of cash and gift vouchers in return for dishonestly boosting their review to five stars. It’s unacceptable. We’re being misled into buying poor quality or even unsafe products by the current system of reviews and rankings. We know online marketplaces and social media sites have taken some steps to address the menace of false reviews but clearly the current system to prevent this type of activity is not working. We’re demanding these sites do more to stop false reviews. Do you support our campaign?