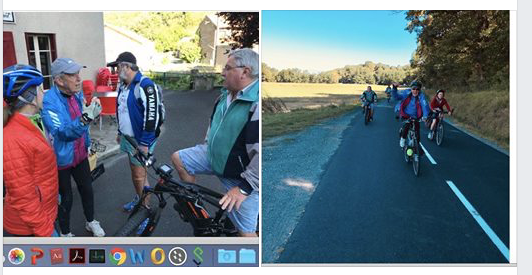 HH is a great storyteller and good at it too. But, of course, he does so with his own style/angle/and gloss. For example, he is very softhearted and often slides into a rhapsodic or sentimental vein (or even both on occasions). For this reason, he provides a good example of ‘social-meaning’ – the meaning he gives to events, which is not necessarily shared by others taking part in those same events. In this example, BC was one of those others and certainly did not share many of HH’s descriptions and interpretations. Even at the height of his own immodesty, BC would not refer to himself as a ‘most glorious bloke’……., although there well be more than touch of humour here. At a later date, BC will return to this post and give his own ‘self-meaning’ to the same events described here by HH. In the meantime – enjoy! BC did and found it most amusing, even if in places it was at his own expense.

A dream my wife E and I have both shared is to one day cycle in France. So, before departing from Florida I crossed my fingers, said a prayer and shipped our two road bikes to Auzon. Thanks to Jeff and Nancy at A1A Cycle Works, the packing was excellent and our bikes did arrive safely and urging us to ride them.

With a little roadside fanfare, we fulfilled our fantasy last Monday, of becoming French cyclists. To our immense surprise were inducted into the Auzon Cycling Club by our new friend BC, the club’s president.

Actually, there had never been an Auzon cycling club until last Monday; but by the time our small cadre of cycling neighbours reached Lamothe, BC was so pleased with our efforts, that he formed a club and proclaimed himself president. His girlfriend P rode along as did Al, and Dan on their E-bikes. It was a postcard perfect day cycling along the Allier river, past cows, fields of corn and fields of sunflowers. The sky was so blue it hurt to look at it and for the first time I understood what Van Gogh had seen and why he needed the colours he had chosen.

BC has a heart condition and so he informed us that he was experiencing a bout of A-fib (racing heart syndrome) and would not ride as fast as the rest of us. I can’t remember celebrating anyone, who has a heart condition, but I do admit feeling a bit relieved, that I might actually have made a new friend, who can ride as slow as myself.

As it turns out BC and I, found our way to “Le Faim Gourmet”, a small cafe in Lamothe, while the rest of our group rolled on. There I discovered BC is a brilliant man, although I had my earlier suspicions. He has travelled globally, and teaching and consulting Fortune 500 companies how to rethink their, well….thinking

Don’t ask me how.

He is the founder of a technology I can’t recall either, but it’s a study in the process of thought and decision-making and if I get it wrong here, BC is liable to murder me next time I visit Auzon.

Interestingly, BC is obsessed with his own death, though I don’t regret mentioning this, because he brings it up to almost anyone he meets.

Frankly, I believe BC has become bored with earthbound challenges, having re-engineered all available pathways of the human brain and so now he has directed that lightning fast brain of his at the one giant unknown, death.

The wonderful thing about BC, and his quest to plan for the end, is that he has rededicated his life to not wasting time. Everything is poignant and immediate and, well pretty damn important for a man, who gives himself a three to five year window.

As I discover on our ride, BC stays near the head of the pack for most of the morning, cheering the Auzon Cycling Club on like a Calvary officer leading the charge. It’s entirely possible he might well be sandbagging and his talk about his imminent demise is a strategy to commandeer the microphone. I don’t really give a damn either way, because he is one of the most glorious blokes I have ever had the pleasure to meet.